On our way to a family wedding in VA this weekend, it seemed a great idea to go green by ditching paper maps for a GPS. The device was attached to the dash and was promptly plugged in to ensure adequate power for the 600 mile journey. 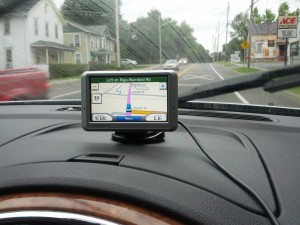 We considered several routes and debated whether time or mileage was the most valued commodity of the trip. We decided we just wanted to reach our destination FAST! Once Ms. GPS began to issue commands, we were at her mercy. Baggage was loaded and three family members and me, also known as an in-law climbed aboard. Somehow, one of us decided it might be fun to also go to the maps/navigator on his cell phone to compare routes. Now, we had the equivalent of two talking heads, a driver, a front seat navigator and two backseat drivers trying to determine the best plan home. Needless to say, not only did the technology not agree, but neither did any two passengers, as to which was the ‘right’ way to go!

We found ourselves with a decision to make. Do we trust the technology or do we trust our past experiences? Collectively, each of us had made that same trip over 10 times, but each taking different routes for different purposes. Long story short, we crossed three bridges over the Susquehanna River, saw the Shamokin Dam from various angles, sped though towns we had never heard of before, all the while each passenger was quacking ‘this isn’t the way we’ve been before’, ‘I don’t remember this!’, and lastly, ‘this GPS is crazy-we should never have trusted it!’ among other not-to-be published comments.

How does the story end? We set a record time of 9.5 hours from Gloucester, VA to the Westside of Rochester, NY! Fabulous! No one could remember completing the route in less than 11hours! We gleefully took credit for our fine driving and navigation skills! The driver is now nicknamed ‘Pegasus’ since he seemed to drive and arrive at record speed, defying construction zones, detour delays and service roads.

What is the moral of the story? When you put three well connected family members and an in-law into an enclosed vehicle and create what seems to be a prime connection with a piece of technology, be sure the humans are well fed, well-watered, and have a sense of adventure. Connect at least two of the passengers with other pieces of technology such as an IPOD, Kindle and a cell phone and miracles can happen. Happy trails!

What are your favorite traveling technology ‘prime-connections’ that you covet on your adventures?