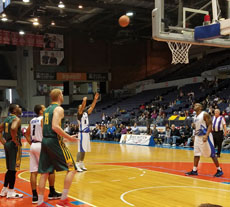 I was gifted with courtside basketball tickets. I must say, the prime-connecting perspectives from courtside were impressive and rich! The game was tied at half time. Players entering in and periodically stepping off court to take the bench. The crowds were shouting, coaches’ voices were raised with their arms flailing and fingers pointing to identify best practices of each of their respective players.

What was most impressive was the reactions and the responses of the players from both teams, who lined up for the foul shots, each side of the basket, with every other member being an opponent. I listened throughout these foul opportunities which were not foul at all. Rather, opponents encouraged each other to make the shot and take the rebound! Several congratulated their rivals on plays well-done by extending their hands-a quick pat to the shoulder or backside, and then off to fight for the ball with the intention to score. Some had clear shots, making 3 point shots often. Others had that same opportunity, but passed the ball to another to take that very same shot. Additionally, coaches were making individual player corrections which were responded to with nod of respect and affirmation of the message received, with appropriate actions following.

Collaborative prime-connections demonstrated by both teams raised both scores to well over 100 points each and the game went into overtime. Although some players may have had more opportunity to score than others, each of the players’ names on both teams were mentioned often and no one name was mentioned particularly more than any other. Each player on each team shared the glory throughout the game, although both teams rivaled hard until the very end.

When I reflect on this example of sportsmanship, this is the kind of team I want to be a part of – at work and at play. Prime-connectors that value their team mates as individuals, know each other’s skills, cheer each team member on to success, and who share the loss together or celebrate the win together. Yet, this is no easy endeavor. Surely, connecting to this level takes coaching, practice, discipline and repetition, but what was most appreciated and evident by each player was the gratitude of being able to play a game each one loved.

Indeed, the love of the game was the prime-connector among all the team members which fueled all other these other positive behaviors. The courtside lesson I take from these players is: Redefining where my ‘love’ lies in any activity? And yours? When life gets muddled, revisit the former ‘loves’ of your life. Dare to get back into the game! Purpose will be renewed, new prime-connections will be made, old prime-connections will be made new, and joy will be restored. Take a shot-find your love of ‘the game’ again!