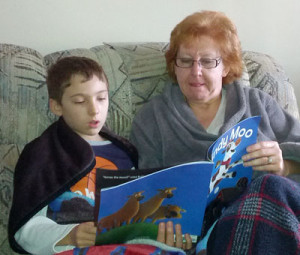 Prime-Connections: What is ‘Cindy Magic’?

People have asked me to define what I call ‘Cindy Magic’. Cindy Magic is the ‘thing’ that makes me unique or special. I just couldn’t put my finger on it until my grandson-want-to-be bought me a book from one of his school’s book fairs. The book is Cindy Moo by Lori Mortensen.

Interestingly enough, it was our special connection to each other and the partial title of the book ‘Cindy’, which spurred him to surprise me with both the gifts of the book and a private reading. Basically, the book was about a cow named Cindy Moo was inspired to jump over the moon after hearing the nursery rhyme Hey Diddle-Diddle read to one of the farmer’s children.

The cat and the fiddle,

The cow jumped over the moon!

The little dog laughed to see such sport,

And the dish ran away with the spoon!

Cindy Moo thought that if that other cow could jump over the moon, then so could she! After several valiant attempts resulting in utter failure (no pun intended), she paused to rethink the entire problem. Then it dawned on her! Cindy Moo saw a reflection of the moon in a puddle! It was an ‘aha’ moment! She got up, gathered some running speed and jumped over the puddle and simultaneously, over the moon! She continued to ‘jump over the moon’ and then invited everyone else to do the same! Cindy Moo delighted in solving the problem and shared in the joy of her barnyard friends as they took turns jumping over the moon!

My prime connection with my grandson-want-to-be and his opportune connection of finding that one special book at a book fair was just a small part of the magic. The story of Cindy Moo solved my dilemma of how to define ‘Cindy Magic’. I learned that ‘Cindy Magic’ is my special gift for explaining complex concepts. As an adult educator, these explanations generate new ways of thinking, learning, and problem-solving.

Recently, at a job interview, I was tasked to create a presentation on the topic of Compton’s Effect or Compton’s Interaction, which is, in essence, quantum physics. Many believe physics concepts are beyond their capacity to learn. Other learners’ eyes generally glaze over with sheer boredom when the word ‘physics’ is mentioned. Instead, I likened Compton’s interaction with matter to a game of billiards commonly known as ‘eight ball’.

Thankfully, I had a pool shark in the shark tank of interviewers. The lesson was clever and thoroughly enjoyed by all! Cindy Moo brought moon jumping to the other barnyard animals. As an educator, I bring often difficult material to learners who have preset notions of abilities. Like the animals in the barnyard who would not even entertain the venture of jumping over the moon, as an educator, I make inspire others to take a risk, take a leap of faith, and just jump into a new adventure of learning!